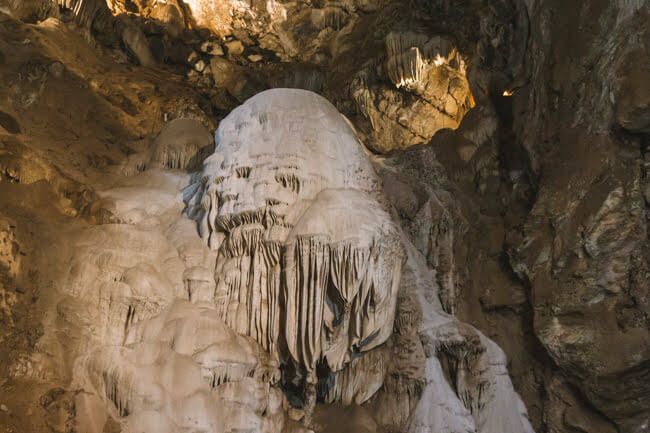 Located in the small town of Vallecito, Moaning Caverns is a unique underground cave that is open to guided tours and other adventurous experiences.

At Moaning Caverns Adventure Park visitors have the opportunity to climb 165 feet down into one of the largest underground caverns in California and observe million-year-old limestone formations inside these caves.

A tour of the Moaning Caverns is only 45 minutes long so it’s a wonderful stop if you’re planning a trip to this area and have the time to spare.

Moaning Caverns is located in Vallecito and is a popular attraction for people visiting nearby towns like Sonora, Jamestown, and Angel Camp.

This whole region consists of older Gold Rush towns from the 1850’s so most attractions in this area are historic with the Moaning Caverns being one of the few exceptions.

We were visiting Sonora over a rainy weekend so our activity options were pretty limited. Thankfully Moaning Caverns Adventure Park offers tours of these caverns all year long.

Visiting Moaning Caverns is a great way to spend an hour to experience something a bit more adventurous besides visiting the historic landmarks.

Tip: I had very little cell phone reception in Vallecito so if you plan to visit Moaning Caverns, make sure to look up directions ahead of time.

The Spiral Tour is only 45 minutes long and is a general guided tour inside the Moaning Caverns. During the Spiral Tour, you will descent 165 feet underground through multiple flights of stairs and observe these caves with an experienced local guide. The Spiral Tour is only $20 and is by far the most popular option since it’s short, easily accessible and takes place every hour.

The Expedition Tour takes it one step further and will lead you down even deeper inside the Moaning Caverns. But this option is pretty adventurous and from what I saw requires visitors to repel and crawl through very small cave openings while holding on to ropes. The Expedition Tour is 3 hours long, costs $95 per person and is available based on reservations.

The Expedition Tour should be done by people that feel very comfortable in small dark places because once you start rappelling into the caves you’re pretty committed to completing this tour.

The Spiral Tour is much easier and you have the option to turn back if you don’t feel comfortable halfway through. If you’re not a fan of small tight spaces, the Spiral Tour is still super fun and not as scary. This is the tour that we chose to do.

Here are a few quick details for the Moaning Caverns Spiral Tour:

Our Experience At Moaning Caverns

When we arrived at Moaning Caverns Adventure Park it was pouring outside. I was worried about our tour being canceled but as it turns out rain actually adds a cool element to these underground tours and sometimes visitors can see rain droplets squeeze through the cavern walls. Even during major storms Moaning Caverns doesn’t get flooded so it stays open all year long.

We arrived for our 11 am Spiral Tour a few minutes early and our guide started the tour at 11 am right on the dot. Even if you purchase your tickets online ahead of time, the guides follow a strict time table so if you’re late, you’ll probably need to wait for the next tour to join.

Our tour group consisted of around 10 people but we came on a rainy weekend so I would expect the summer groups to be a lot more packed (up to 40 people).

The Spiral Tour started with a look inside the original cavern opening that is now blocked off for visitor safety. This opening used to be completely covered by trees and bushes so many animals (and people) couldn’t see it and have lost lives after falling into it unexpectedly.

The Moaning Caverns were first discovered by Gold Miners in the 1850s who thought that they just found a gold mine. Unfortunately for them, these caves are made of limestone and do not produce any gold. But because there was no gold here, the caves were left alone undisturbed and in the 1920s they were opened to the public as a natural attraction.

After a quick intro of the Moaning Caverns, our guide took us down the first section of stairs through a narrow canyon-like opening.

The first section of stairs stops at around 65 feet below ground in a large opening where it flattens out a bit. The Moaning Cavern Adventure Park has set up an observation deck where we hung out while our tour guide told us a bit more about these caves.

The entire Moaning Cavern is filled with unique limestone formations called stalactites and stalagmites. Stalactites hang from the ceiling while stalagmites rise from the floor and eventually they will both meet in the middle.

These formations are always growing towards each other but at a super slow rate so at Moaning Caverns they won’t even touch in the next few generations. It takes millions of years for these formations to grow so it’s super important not to disturb them in any way.

For the most part, visitors are not allowed to touch any of the cavern walls because once a formation is touched by hand, it stops growing completely. But there was a designated “touching wall” in this viewing area for those visitors who are curious about what this limestone feels like.

From here we descended another 100 feet below down a spiral staircase made of WWI battleship. This staircase was the scariest part for me since it was super narrow and made my head feel dizzy from the non-stop spirals. Thankfully the whole staircase is surrounded by metal enclosures so it’s super safe even if your head starts spinning.

At the bottom, there was another viewing area with benches for resting. We spent most of the tour here observing the different formations like “Angel Wings”, “Jellyfish” and “Chocolate Waterfall” that have been nicknamed after their looks.

Some of these limestone formations are pretty big up to 25 feet in size while some are translucent and as thin as a potato chip. It’s actually quite difficult to tell the scale of these formations since there is nothing nearby giving away their scale for reference.

During the tour, our guide turned off all of the artificial lights underground to get a feel for how the original miners felt underground. It was pitch dark inside and we really couldn’t see anything at all which felt very creepy.

The only sounds we heard were water drippings from the formations hitting the ground. During certain times when the water drips from the ceiling, it makes a moaning sound which is how these caves earned their name.

All together the Moaning Cavern Spiral tour descends to about 165 feet underground making it the tallest show cavern in California.

Here are a few other great things to check out in the area: 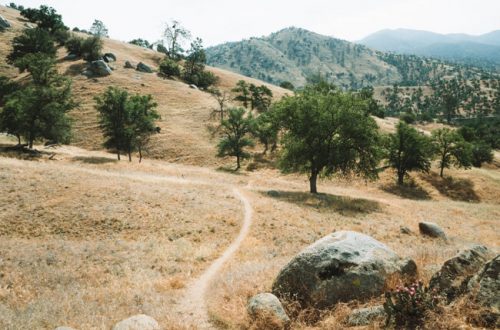 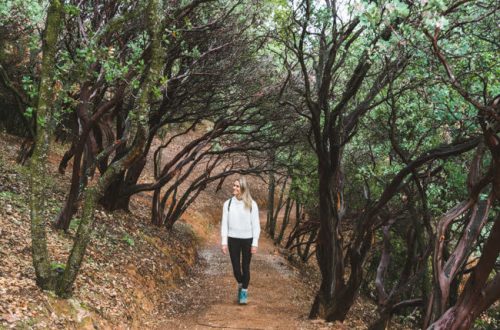 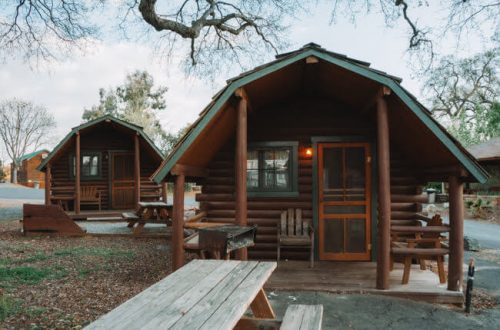 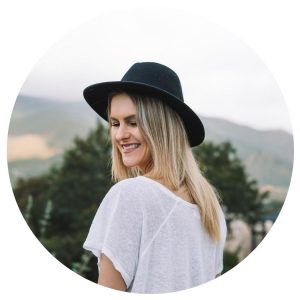